While, as a consequence of the Corona pandemic, migration between Germany and abroad has at least temporarily collapsed, suburbanisation continues in almost all major cities with tight housing markets. And even more cities have been added. We take the now available district data for 2020 as an opportunity to take a closer look at some trends in the migration data.

No district-to-district data are currently available for 2020, so that the surrounding migration of the metropolises cannot yet be statistically evaluated in detail. For a first classification, the following map summarises the intra-German migration balances (i.e. excluding foreign migration) per 1,000 inhabitants at the district level and compares here the periods 2012-2014, 2015-2017 and 2018-2020. Whereas the middle period is primarily dominated by the sharp increase in foreign immigration and the resulting moves within Germany, the comparison of the 2012-2014 and 2018-2020 periods makes it clear that something has changed structurally here.

From 2012 to 2014, 43 of the 107 district-free cities had negative net migration on average over the years, and from 2018 to 2020, net migration was negative in 73 district-free cities. Conversely, for the 294 districts, the number of districts with positive net migration increased from 169 in 2012 to 2014 to 233 in 2018-2020. Our colleagues at empirica also noted in the spring report of the real estate industry that it is now not only the immediate surroundings of metropolitan areas that are gaining from in-migration, but also districts within 1 to 1.5 hours' driving time.2

This change is clearly visible in the map in the examples of Stuttgart and Munich. While the largest migration gains in the surrounding area are now achieved in the second ring (2018-2020) instead of in the first ring (2012-2014), the inner-German migration balances in the first ring are in some cases even negative.

Another significant change can be seen in many rural regions, e.g. in northern Hesse, Rhineland-Palatinate, the Black Forest or in many regions in the east. These regions benefited from intra-German migration in the last period shown, but still recorded losses from 2012 to 2014. However, not all rural regions benefit equally from this trend. For example, the Harz or South Westphalia and parts of eastern Germany remain out-migration regions.

Development in the top 7

In the banking metropolis of Frankfurt am Main, immigration in 2020 has dropped just as significantly (only +55,500 instead of +66,400 in the previous year), especially immigration from abroad (+20,400 instead of +30,100). Out-migration has also fallen, although not as sharply. Frankfurt is now also shrinking in net migration. The picture also repeats itself in Stuttgart, where the Corona year 2020 has also acted as a trend booster and pushed net migration into negative territory. This development had already become apparent in previous years, but in 2020 immigration was once again around 18% lower than in 2019. This development does not stop in Munich either; in-migration to Munich has fallen more sharply than out-migration from Munich and the balance is correspondingly negative.

The ranges shown in the text refer to the absolute net migration in each case in order to illustrate the magnitude of the respective changes in 2020 compared to 2019. In order to be able to better compare the cities with each other, the following graph summarises them as a single indicator per 1,000 inhabitants. The trend reversal in these cities is clearly visible from the line for total net migration shown in black.

The thesis of trend intensification for suburbanisation, which is often discussed in connection with Corona, can be strengthened on the basis of the migration data from 2020. The emphasis here, however, is on trend intensification, since migration in previous years already shows stronger suburbanisation as well as higher migration gains in some rural regions. The biggest difference between 2020 and the previous years, however, is the reduced migration to the core cities. It remains to be seen how things will develop here in the post-Corona period. As long as the purchase prices in the metropolises in particular continue to rise so strongly, however, a sustained high rate of suburbanisation can be expected, in the case of Munich, Stuttgart or Frankfurt am Main especially also in the second ring, with corresponding consequences for the volume of traffic and the demand for building land in these regions. Against this background, the current discussions on energy and transport transition, digitalisation, home office, housing affordability and land sealing must be conducted.

The article from 2008 cited at the beginning shows, based on surveys of migration motives, that many suburbanites would have liked to stay in the city, but were unable to realise their housing preferences here. This is certainly still true today, with the insufficient supply of housing, especially for families and households with lower incomes, and too high housing costs being cited as factors for migration to the surrounding areas.

The official migration statistics can be evaluated both differentiated by age and by region of destination and origin. The migration figures are provided in the empirica regional database not only differentiated by age, but also summarised for the respective surrounding area, the rest of Germany and abroad. Migration between individual districts can also be evaluated in a differentiated manner. Due to methodological and data protection changes at the Federal Statistical Office, individual migration figures from recent years are currently only available to a limited extent, so that, for example, the inflows and outflows for our aggregated regions (here the top 7 overall) cannot be calculated. However, migration balances are consistently available as a data basis from 2005 to 2020 and other time series are updated as soon as new data are available.
The empirica regional database is updated continuously and offers a broad, reliable database for different questions. Methodological changes in the data bases are homogenised, all data are comparable over time and regionally. The migration data are included in all licence models as well as many other data for the analysis of demographic structures.
demography housing market blog 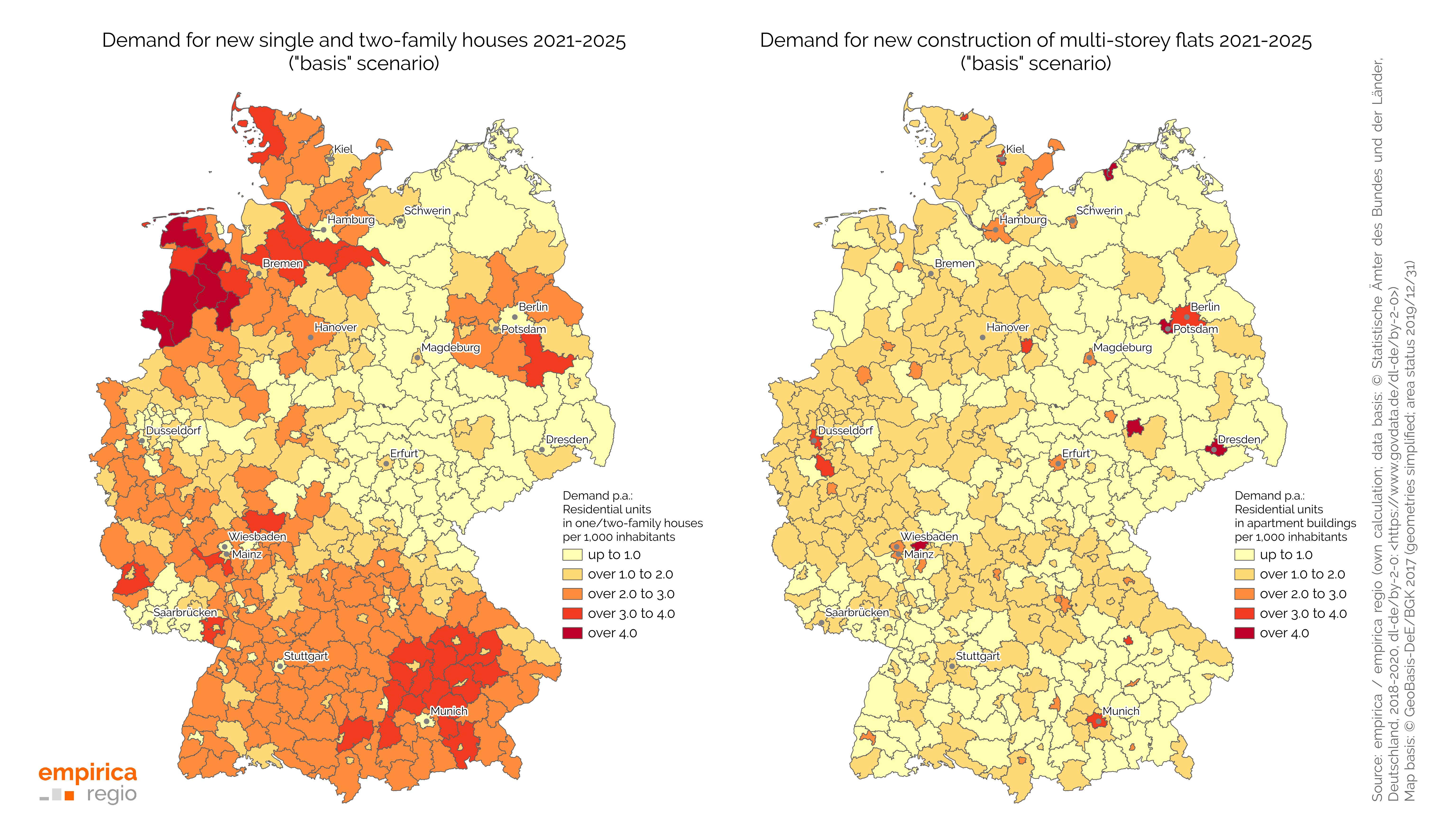 Initial Situation Before the Corona Crisis In recent quarters, purchase prices in Germany have continued to rise, while rents in many core cities rose less strongly than before or even stagnated.