In 2015 the so-called rent brake was introduced in some federal states in Germany. The aim of the initiative was to curb the price increase of newly contracted rents in prospering cities so that housing in these cities remains affordable even for middle and low-income households. At least that is how the draft law on the corresponding amendment to the tenancy law should be understood. ZEIT ONLINE has asked empirica regio to investigate the price development of newly advertised rental flats since the introduction of the rent brake in selected cities. However, the following evaluation is not a comprehensive study of the effects of the rent brake, but only an ad-hoc evaluation of the supply rents of individual cities.

Since the introduction of the rent brake, newly agreed rents in regions with tight housing markets may only exceed the local comparative rent by a maximum of 10%. This does not apply to comprehensively modernised flats and those that were first occupied after 1 October 2014. Flats that are rented for a limited period of time are not affected by the measure either. The new contractual rentals of these uncontrolled flats can still be freely negotiated. In contrast, the following evaluation is limited to the “braked” or curbed flats.1 In addition, the period under investigation was standardised in such a way that for each city there are six half-years before the respective introduction of the rent brake and six half-years afterwards.

The development of the advertised rents examined in the study suggests that there was no serious impact of the reform on price developments. At best, there is a moderate decline in rents in most cities between the six months before and after the introduction of the rent brake. However, the evaluation is a purely descriptive analysis which does not allow any direct conclusions to be drawn about the causal effects of the reform. For a causal-analytical evaluation, one would have to be able to observe the affected housing in a world where the rent brake applies and the same housing at the same time in a world where it does not apply. Only then would it be possible to accurately determine how the measure unfolds. However, this is simply not the case and it is always unclear whether a decrease in new rentals under new contracts can actually be attributed to the rent brake or whether other circumstances - unrelated to the rent brake - are responsible for the price decrease.

In empirical social research, however, there are various methods for quantifying the effects of such a reform nonetheless. Studies based on these methods come to the unanimous conclusion - in contrast to the price development shown above - that the reform had a price-dampening effect. Although this price dampening effect is relatively small.2

The evaluation is also made more difficult by a derogation. This is because even after the introduction of the rent brake, the new contractual rent of formally braked flats may always be raised up to the amount of the rent paid by the previous tenant. However, there are no meaningful data sets on the level of previous rents in Germany, which is why the legal rent and thus the potential effects of the reform always remain unknown. Moreover, even price damping effects reveal little about whether the intended target group of middle and low income households actually benefits from it.

In short, one knows surprisingly little. 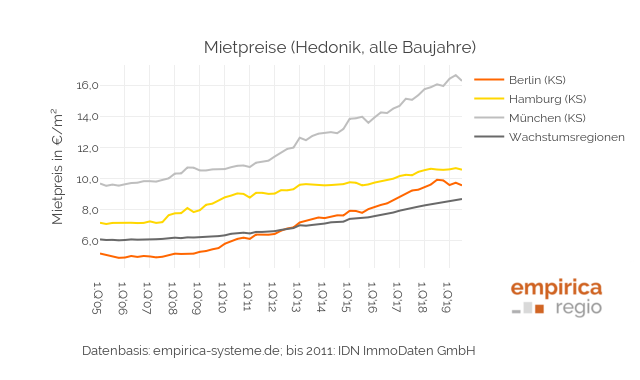 The rents and purchase prices for the third quarter of 2019 from the empirica real estate price index are available. 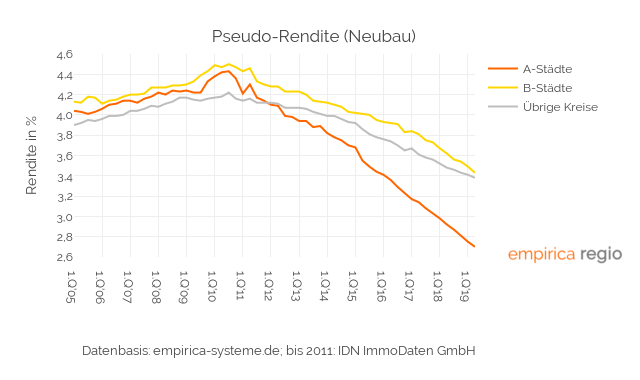 New rents and purchase prices for the second quarter of 2019 from the empirica price database are now available for download.

Purchase prices continue to rise faster than rents. Condominiums increased by 2.4% compared to the previous quarter.