The data are available via the empirica regio market studio and are included in our housing market reports. Here we would like to briefly and concisely present selected results of the housing market forecast. A more detailed discussion of the results can be found in the current empirica-Paper No. 256 (available in Germany).1

Demand for New Apartments until 2030

Three scenarios are considered for the forecast. Depending on the scenario, this results in an average annual demand for new housing for the whole of Germany of between 311,000 and 321,000 new flats in 2020, and an estimated demand of between 269,000 and 282,000 new flats in 2021. The following figure shows the estimated demand for new construction between 2020 and 2030 in the middle “base” scenario for the whole of Germany. The forecast shows the estimated demand, which is derived from the demographic development. However, it does not represent a forecast of construction activity. The construction completions of around 293,000 dwellings already available for 2019 are slightly below the demand estimate for 2020, but above the estimated new construction demand for 2021. However, this simple comparison for the whole of Germany does not take into account the regionally different distribution of demand and construction activity. In fact, in purely quantitative terms, too little construction tends to be carried out in urban growth regions, and too much in shrinking, often rural, regions.

Spatial Distribution of the Demand for New Apartments

Demand for new construction varies from region to region. The forecast takes into account not only the absolute new demand resulting from the change in the number of households, but also the qualitative additional demand. This means that there is also demand for new construction where the number of households decreases or where there are vacancies. This applies in particular to the segment of detached and semi-detached houses. New construction demand for multi-family houses, on the other hand, is mainly concentrated in the larger centres and their surrounding areas.

Is there a Need to Catch up?

When housing is scarce, i.e. when there is too little construction, and housing is therefore becoming more and more expensive, many households choose alternative locations. The migration data of recent years show that the influx into the (wider) surrounding area of the larger centres has increased. For example, the university towns, which have been cheaper up to now, have benefited more than before from immigration by young people. Therefore, a lack of new construction in the past does not necessarily have to be “made up for”. If the demand for new construction and construction activity were to be balanced in the future, no additional shortage would be created. However, if rents in the strained regions are to be eased, there would be the possibility of either building more new homes here than the forecast demand estimates, or shifting demand to regions with low shortages or vacancies.

The empirica housing market forecast represents an estimate of the demand for new construction, i.e. the additional housing needed in the future due to increasing population/household numbers. The estimate is based on the ranges of the 14th Coordinated Population Forecast of the Federal Statistical Office2, assuming an average annual migration balance between 147,000 (scenario “negative”) and 311,000 (scenario “trend”). As a result, the population trend gradually flattens out. In the “negative” scenario, the population maximum is reached in 2024, in the “trend” scenario after 2030. Possible changes in migration to and from Germany as a result of the corona crisis are not yet taken into account. Furthermore, changes in household size and age distribution, current vacancies, and subletting and second home rates are also taken into account for the forecast. In addition, the qualitative demand for new construction is estimated.

Initial Situation Before the Corona Crisis In recent quarters, purchase prices in Germany have continued to rise, while rents in many core cities rose less strongly than before or even stagnated. 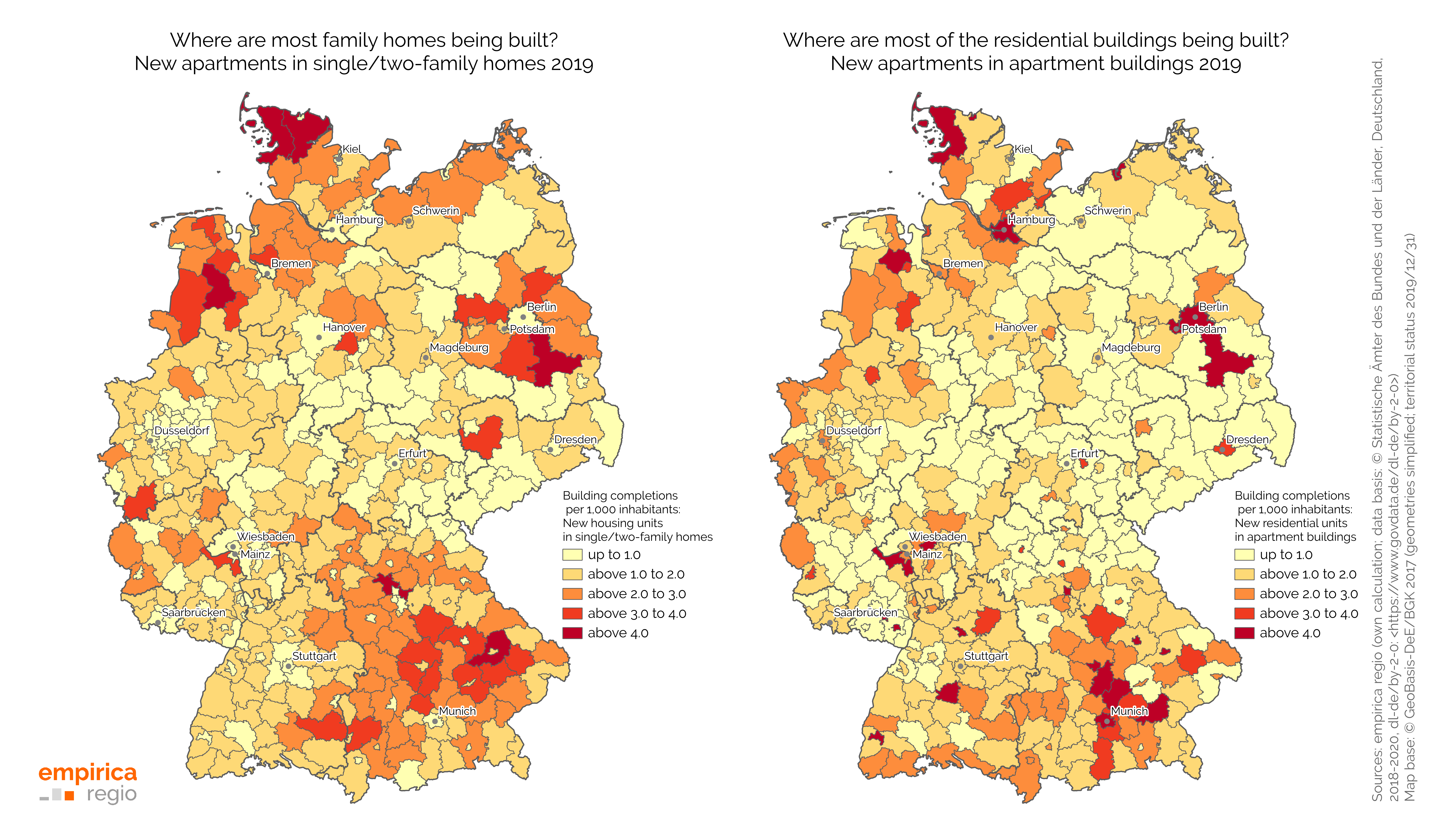 The empirica regional database has received a comprehensive data update, which is now available to all customers.