Initial Situation Before the Corona Crisis

In recent quarters, purchase prices in Germany have continued to rise, while rents in many core cities rose less strongly than before or even stagnated.

In recent months, this has led to a widening spread between rental and purchase prices. Since the fourth quarter of 2019, the labour market has shown the first signs of fatigue with stagnating unemployment figures, some of which are rising slightly. There has been much debate as to whether a turnaround is imminent in the current housing market cycle. However, with the outbreak of the corona pandemic and a massive economic slump, the outlook has changed completely. With regard to the housing market, the main question is now whether and to what extent Covid-19 is leaving its mark on the current housing market data. To this end, we would like to take a brief look at selected indicators and make an initial rough assessment.

The current economic figures from March 2020 onwards clearly show the effects of the corona crisis. The production index for March 2020 shows a decline of -6.7% compared to March 2019, the volume index for new orders in the manufacturing industry even shows -11.9%. At the same time, unemployment figures in March 2020 were 1.5% higher than in the same month of the previous year. In April the production index decreased by -25.3% compared to the previous year and new orders decreased by -36.7%. Unemployment was 18.6% higher than in April last year. This represents an increase of around 415,000 unemployed persons compared to the same month last year and 308,000 unemployed persons more than one month before. The latest data for May show a further increase of around 169,000 unemployed compared to April. This represents an increase of 25.8% in May compared to April. Other economic data are also clearly negative. Retail sales, for example, were 6.5% lower in April 2020 than in April 2019.1 The short-term economic consequences are already clearly visible.

Production index and volume index for May 2020 not yet available at the beginning of June
Source: own representation based on Federal Statistical Office (Destatis), 2020 (production index, volume index) and
Statistics of the Federal Employment Agency (unemployment figures)

Various analyses of housing market advertisements show that there has been a decline in the number of advertised residential properties throughout Germany since the contact ban on 16 March 2020.2 We wanted to know more about it and have therefore examined the advertised rented and owner-occupied flats in German cities with more than 50,000 inhabitans (the evaluations for various cities can be found at go.empirica-regio.de). For this purpose we have evaluated the offers and prices by the starting date of the advertisement. The following figure shows an example of the data for condominiums in Frankfurt/Main. The results for all cities show: A noticeable decline in the number of advertised rental and owner-occupied flats can be observed since 16 March. The price development is less clear; neither rents nor purchase prices for condominiums have changed significantly since mid-March. The partially observed price decreases are within the usual fluctuations and cannot be attributed to Covid-19 alone. The decline in offers can also be seen in the data for Frankfurt/Main presented here. The purchase prices even rose initially in March and then returned to the average level of the last few months. Our colleagues from empirica accordingly stated that the property market was simply frozen in the short term3.

The German keywords “Miete” (rent), “Eigentumswohnung” (condominium) and “Stundung” (deferral) from the Google Trends for Germany reflect the course of the Corona pandemic much more strongly than the data of advertised flats. At the beginning of March, search queries for “rent” and “condominium” initially declined, but then queries for “rent” rose significantly in the third week of March. At the same time, the trend for “deferral” also rose significantly. This week saw the start of the discussion about protection against dismissal and deferral of payment for tenants. On 23 March, the Federal Cabinet adopted the corresponding Draft law to mitigate the consequences of the COVID 19 pandemic (press release in German). Parallel to this development, however, interest in condominiums seems to have declined significantly.

What is most interesting, however, is that although the trends deviated significantly upwards and downwards from the usual fluctuations (e.g. Christmas/New Year’s Eve) in mid-March, they had already settled back to pre-Corona levels by mid-April. During this period, mortgage contracts for private customers were also increasingly granted again, while the number of new loan contracts stagnated at a low level.4

Interest in Germany according to Google Trends (Index 0-100, 100 = maximum popularity in the period)
Source: own evaluation based on Google Trends

Some housing market experts already suspect that in the future the home will even become more important as the centre of life, but also as a workplace (home office). Features such as flexible living spaces, access to the garden or a balcony will then gain in importance. The Google trends show that the keywords “garden” and “balcony” were much more in demand this spring in Germany than last year and the increased interest is continuing.5

The data clearly show the impact of the corona pandemic on the economy. The housing market, on the other hand, is reacting sluggishly and, measured by advertised flats, has so far only shown a decline in the number of advertises, but no collapse in prices. Whether and to what extent Covid-19 still leaves a footprint on the housing market will only become apparent in the coming months and will depend to a large extent on the further economic development. When new data on this will become available, we will discuss them here. 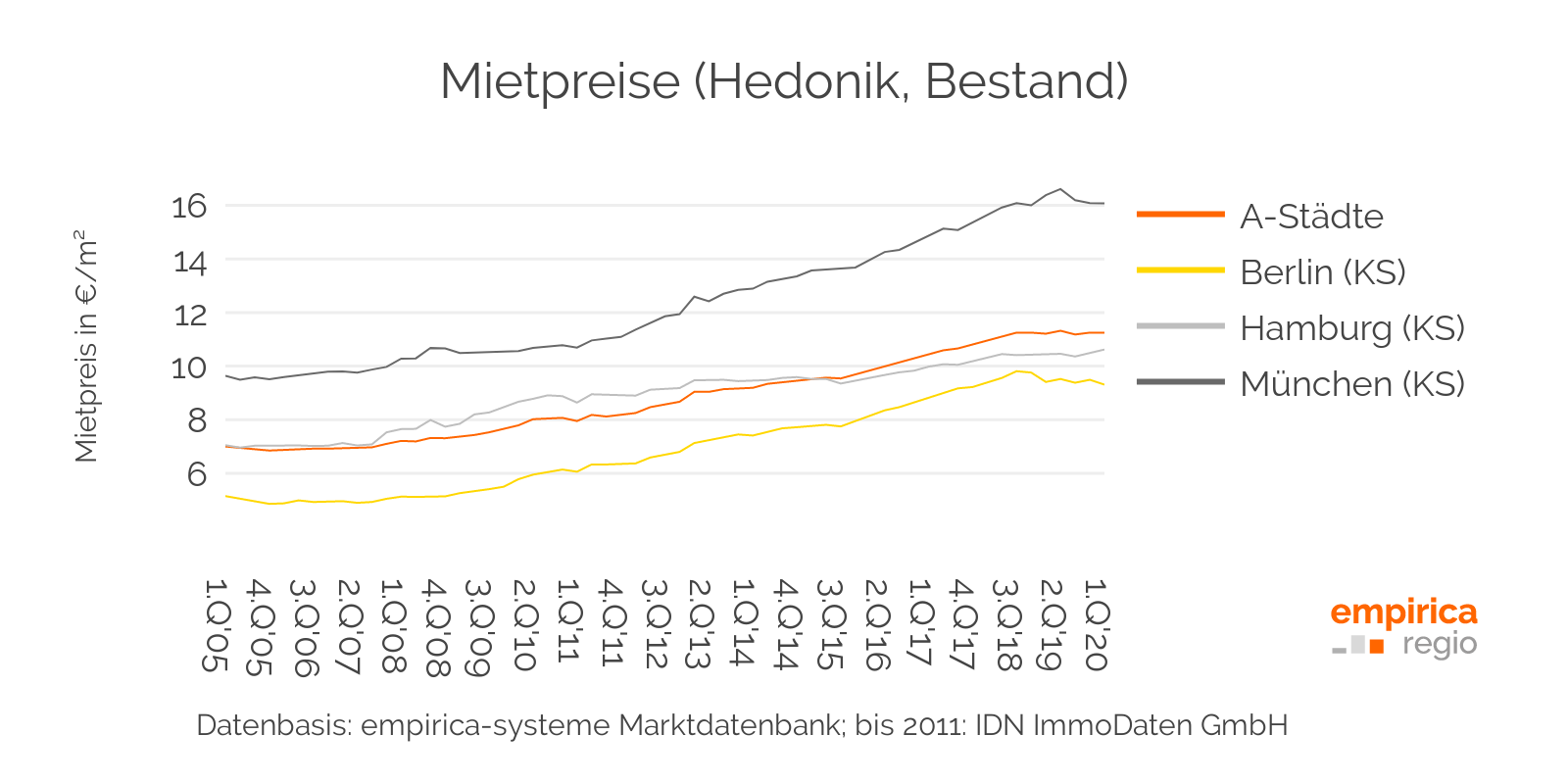 What slowly became apparent in the last months is continuing: the rise in rents is continuing to slow down, especially in the metropolitan areas. 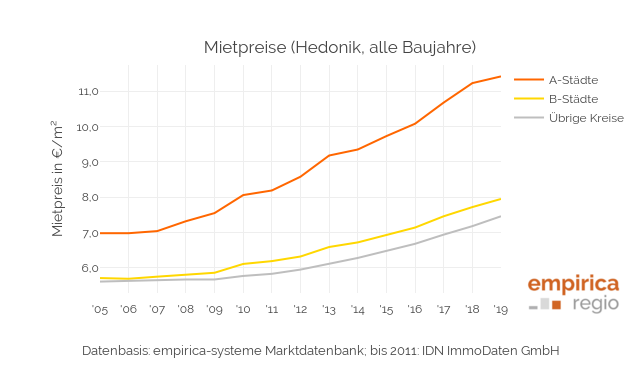 The empirica real estate price index for the fourth quarter of 2019 is now available. The rise in purchase prices continues.